They say that imitation is the the sincerest form of flattery so imagine my surprise watching Dopesick (S1, E5) on Disney+ when the hard working DEA agent is told that with a tool that looks like Agent Ransack:

“… what’s taken you months will now be accomplished in just a few seconds.”

I say ‘looks like’ because they’ve moved a few things around. Here’s the Dopesick screen shot (approx. 12:09s):

They’ve removed the ‘File name’ fields and moved the date and size fields but the rest is identical.

Disney probably should’ve asked Mythicsoft for permission to use an altered version of Agent Ransack in their show but I’m satisfied with the compliment.

We’re really pleased to announce that the next version of FileLocator Pro and Agent Ransack is now available for download:

END_OF_DOCUMENT_TOKEN_TO_BE_REPLACED

I’m pleased to announce that the beta version for the next major release of FileLocator Pro and Agent Ransack is now available to download. This version has been a long time in the making and includes some really nice improvements, and will be a free upgrade for any recent purchases.

Please note that this is a beta version of the product and will contain bugs, although hopefully not too many. The help file has not yet been updated so if you have questions about specific features please ask Support.

Over the next few weeks more beta versions will be released along with improved documentation on the new features so please check back here for updates.

END_OF_DOCUMENT_TOKEN_TO_BE_REPLACED

We’ve been ‘dog-fooding‘ the next major version for a few weeks now and everything is looking really nice, there’s still a few issues but work is progressing well. One of the areas that has had a big revamp is the visual themes, here’s an example of the new ‘Blue’ theme: 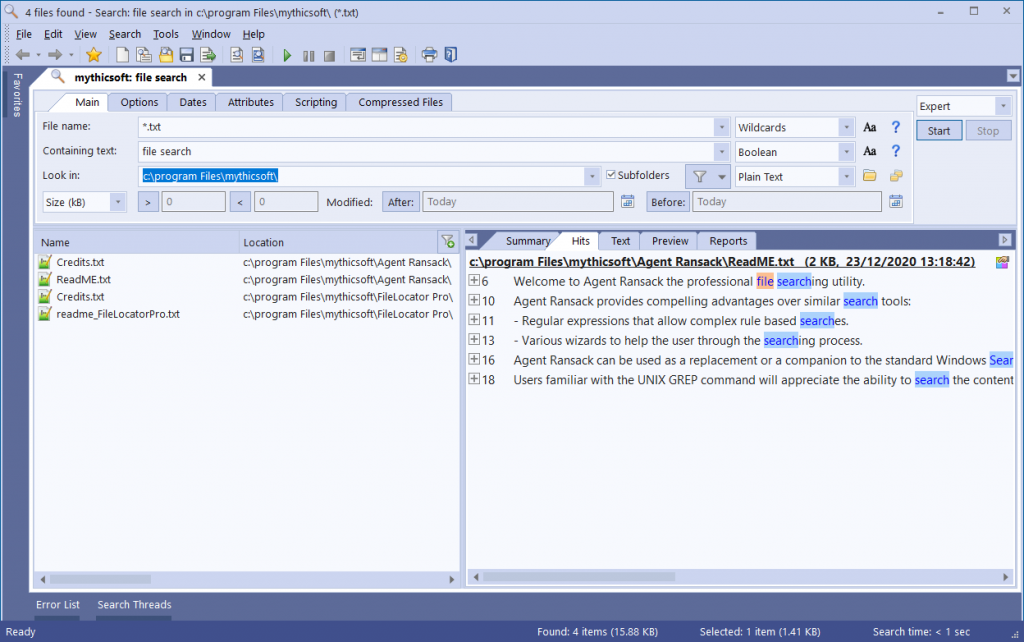 If you look closely you’ll also see a language change from ‘DOS Expression’ to ‘Wildcards’. The term ‘DOS Expression’ has been used in the product for over twenty years but now, when some of our younger users have never heard of DOS, the decision was made to gracefully retire the term from the UI.

Just in case you’re wondering what’s going on with FileLocator Pro and Agent Ransack we just wanted to share some updates.

There’s no denying that version 9 is running late. We had hoped to release it in 2019 but the Agent Ransack Pro/Lite mode work pushed it back quite a bit. There’s also been a lot of feedback from version 8, especially surrounding indexing, which has involved a major rework of how indexing works internally.

Indexing in v9 will include an option for real-time updates, the ability to group indexes together, and also precise search options, including search by Name, Size, Date, Type, and Location. A sneaky preview screenshot also shows that the indexing history is much more accessible to help diagnose and resolve any indexing issues.

One other thing you’ll probably notice from the screenshot is that there is now an improved dark theme for v9, a very common feature request.

Don’t worry if indexing isn’t an important feature for you as there’s plenty of other new functionality coming in v9, which we’ll be sharing over the next few months.

At the moment the expected release date is Apr 2021 but whatever the actual date is all v8 purchases made now are guaranteed to work for v9. 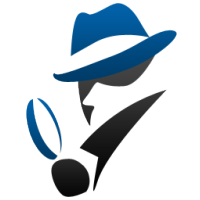 I’m pleased to report that Agent Ransack 2019 is now available for download.

Maintaining separate code branches for the Pro and Lite version is not an efficient way to develop the products. Over time the code diverges enough that it becomes harder and harder to apply patches from the Pro version to the Lite version. The loser in this patching battle is invariably the Lite version. Version 8 of FileLocator Pro has received nearly fifty enhancement updates since its release in 2016. The Lite version? Five.

So Agent Ransack will now be benefiting from the same update schedule as FileLocator Pro. Here’s just some of the new features that are now available in the Agent Ransack:

Probably the most prominent change you’ll notice is when you start Agent Ransack for the very first time, you’ll be asked if you want to try the Pro features:

You can, of course, just click ‘Lite (free)’ if you want to continue using Agent Ransack for free but if you are curious about what the Pro features might offer you can switch them on for the trial period. After the trial period has elapsed you can either switch back to the free Lite mode or pay for a Pro license.

As always, if you have any opinions on this change please let us know at: support@mythicsoft.com

I was looking at a recent error report and surprised to see included in the error report a screen shot of a software pirate at work. The miscreant appears to have been trying to figure out why a crash was occurring with the license checks removed:

It’s not the first time I’ve seen such screenshots but it’s a useful reminder of how hard people work on tasks that, consciously or not, undermine the  structure of the company and the ability to support and improve the very products they, the pirates, want to use.

END_OF_DOCUMENT_TOKEN_TO_BE_REPLACED

Back in Apr 2016 when I introduced version 8 of FileLocator Pro I ended with a ‘Roadmap’ of planned features for version 8:

The list was based on customer feedback and contained features I knew people wanted and would be disappointed weren’t in the initial release. I’m pleased to say that with build 2878 of FileLocator Pro the last of those promised features has been implemented. Over the last few years there’s been a lot of really nice new features added to the product which weren’t on the list but honouring the promises on the list was a major focus of the development efforts.

END_OF_DOCUMENT_TOKEN_TO_BE_REPLACED

If you’ve been paying attention to the release history of FileLocator Pro you may have spotted a new feature “Ability to switch to ‘Lite’ mode without installing separate product”, ie you can install FileLocator Pro but switch to FileLocator Lite functionality with just a few clicks.

It’s quite a major change and it’s going to affect the way we develop and distribute the Lite and Pro versions of the product. Rather than have a separate Lite product we’re going to be switching to a unified product that can switch Pro functionality on/off as required.

END_OF_DOCUMENT_TOKEN_TO_BE_REPLACED

Support for long paths (ie paths greater than 255 characters) has been an increasingly requested feature and so I’m really pleased to see it added to the latest version of FileLocator Pro. Since FileLocator Pro does sometimes rely on the Windows shell for functionality such as file context menus it’s possible that, until Windows fully supports long paths, not every aspect will function perfectly but any issues should be the exception and not the norm.

File paths in Windows are more complicated than most end users realise but fortunately Windows hides much of the complexity, if you’re interested in some of the inner workings I recommend you read this blog post: DOS to NT: A Path’s Journey.

Although Microsoft has been adding long path support to Windows 10 it’s actually quite a difficult problem. Many third party applications have the value (commonly called MAX_PATH) hard coded since the Windows API documentation specifically refers to it. Therefore it’s potentially troublesome for Windows 10 to simply switch on long file support by default, those third party applications not expecting paths longer than MAX_PATH might start crashing with buffer overflows, or worse if the overflows are maliciously targeted.

Please try out the long path support in FileLocator Pro and, as always, if you find any problems please report it to Tech Support.